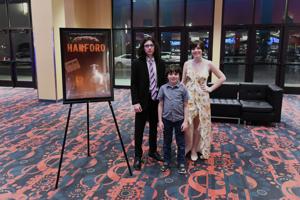 RICHLAND, WA – ‘Hanford’ the film, tells the story of more than just the Manhattan Project. It’s about the effort to end World War II and what came after the war.

Augustin Dulauroy is a senior at Hanford High School that set out to create a so-called short film for his documentary class. Upon doing his research, Dulauroy realized there was too much information to put in a short film.

Augustin and his parents moved to the United States from France about six years ago. Much like the original Hanford employees, they moved to Richland because of Augustin’s father’s job.

In talking to the Dulauroy family, it was clear this film was more of a family project Augustin was driving.

His mother, Virginie Dulauroy owns a production company in France and the US, which Augustin is a part of. His sister Marie, is the artist behind the poster hanging in theaters.

His parents say he’s always been an inventor of sorts. When he was little, he always had creations so naturally, being a filmmaker was no surprise.

I asked Augustin, “why the Hanford site? What drew you to pick that as your film topic?”

“I like nuclear energy, it’s a topic that’s always interested me since I was a kid,” he said, “Also right next to where we live so that made it easier to find people to talk about it and find archives.”

And archives he found. He accredits historian Robert Franklin for inspiring him to dig deeper with such well -preserved archives.

When the atomic bombs were dropped on Hiroshima in 1945, DuPont wanted no more affiliation with the Manhattan Project and Hanford. Thus came, General Electric.

Richland continued to expand, bringing people from all across the United States to work in Hanford.

Often we don’t see know the history of where we live. Augustin showed us the history of Richland and the growth around it. From native lands to what is now the Tri-Cities.

He hopes to attend college and continue creating short films. He says it’s a hobby he doesn’t see giving up, but “maybe I’ll find more of a career and drop out to create films.”

Augustin says the feedback has been great. On the day of the premiere, many thanked him for telling the story of Richland. Many had moved to Richland with their families working on the Hanford Site or they were part of the Manhattan Project.

Overall, he says it was more about telling the story and learning about it. As well as being able to see how many people planted roots in the Tri-Cities after.

Virginie says there were plenty of nights Augustin nearly didn’t sleep because of his focus on editing the documentary together.

“There were tons of archives… I remember seeing him at night, almost midnight when I would go say goodnight, he was working on the interview,” she said.

He would spend most his nights reviewing footage from interviews and archive videos then start sorting them by topics.

“Okay this is going to the Manhattan Project,” she said, “this goes to the Cold War and I think that was the painful part for him.”

What’s next for the Hanford Site? In recent years, the goal of the Hanford site has shifted. They’ve shifted focus on repurposing waste. Recently, they have decided to turn waste into glass.

Since the film’s original air date on February 28th, Fairchild Cinemas has seen a large request to see the film. They decided to add two more weeks’ worth of showings.

However, just last week Fairchild Cinemas added ANOTHER two weeks of showings. If you like to watch films from your couch, Augustin’s film is available on Amazon Video.

You can purchase tickets for Fairchild Cinemas or watch it on Amazon.