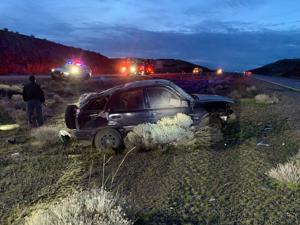 BENTON COUNTY, WA -Benton County Fire District #1 units responded to a one vehicle rollover accident in the median of Interstate 82 about half a mile outside Kennewick city limits, Saturday morning.

According to Washington State Patrol, the driver- male, was head westbound on I-82 when he lost control of the vehicle. WSP says the driver went off the roadway to the right, overcorrected and rolled into the media.

The driver had no seatbelt on and was driving under the influence. He was transported to Trios Health.

He’s being charged with DUI, driving with a suspended license and not wearing a seatbelt.