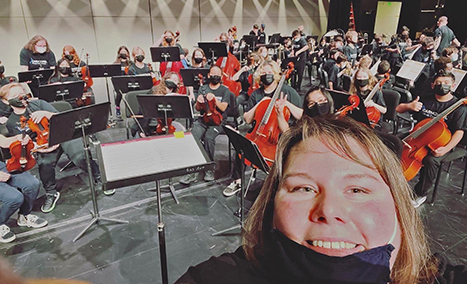 One of Richland School District’s veteran music teachers is in the spotlight for the work she is doing with middle school student musicians.

Sarah Berglund was recently named 2021 Washington State Middle School Music Teacher of the Year by the Washington Music Educators Association (WMEA). Ms. Berglund has spent the past 15 years helping to build music programs in the district, notably at Carmichael Middle School and Richland High School as an orchestra teacher, nurturing the next generation’s love of music and engaging and inspiring students.

“Sarah is an amazing teacher, both in the field of music and as a role model for all our students,” says Carmichael Principal Brian Stadelman. “She is an excellent representative for our school and district when it comes to the transformational power of education.”

Ms. Berglund joined the district in 2008. She has led the district’s music department, supported the district’s Destination Imagination program and advises Carmichael’s National Junior Honor Society chapter. She also is president-elect for the Columbia Basin Music Educators Association and has played a crucial role in helping other teachers grow their skills in music as well as technology.

Creating opportunities for youth to explore the world of music on their terms has been a crucial part of Ms. Berglund’s work. She has partnered with regional performing arts groups such as the Mid-Columbia Mastersingers to work with students and strengthen their skills and taken students around the country to perform. She has also orchestrated performances of her students at elementary schools and created the Music Mentor program to pair middle and high school strings students.

These efforts have not only led to her student ensembles earning high ratings in competitions and festivals but given every student the chance to make the arts part of their lives.