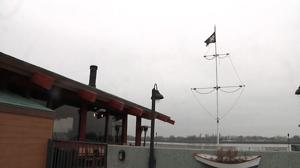 Co-owners of Cedars at Pier One participates in a round table with senator Maria Cantwell (D) WA on Tuesday. The restaurant revitalization relief package which included funds for restaurants only went to just roughly half of the businesses in Washington state who were eligible.

Senator Cantwell is a member of the small business committee on capitol hill. They’re trying to get support for a bipartisan effort to help businesses with a proposed 60-billion for restaurants nationwide.

Doug and Carrie Lundgren, Co-Owners at Cedars, have used all of their resources to keep the doors open. They came in with a plan, savings, and goals. But the pandemic threw a wrench into all that.

Tuesday at that roundtable to discuss restaurant revitalization funding, Carrie and Doug shared their story with different restaurant owners across Washington. Restaurant Owners in different places are experiencing the same issues, like supply shortages, inflation, sick workers, a lack of workers, and fewer visitors.

“It’s like, how much longer can this go? At this point to get over it, it’s gonna take us years to recover what we lost the last few years,” said Carrie.

They became the owners of Cedars in late 2019, right before the pandemic hit that spring. And they say they never thought that it would last this long.

“The Omicron variant of the COVID pandemic is just one more wave of pressure on our local restaurants which are such great employers for our community,” said Cantwell.

Senator Cantwell said many who were eligible for those funds didn’t get them. That’s why she is trying to get bipartisan support to help these restaurants in in the coming months that would benefit owners across the country.

“It is a crisis and these people are barely hanging on. They should have gotten the help and support. Now that other things have moved off the table we think this should be a priority within the next 60 days,” said Cantwell.

“Thank you Cantwell for that round table today. We hate to put it out there and be vulnerable. Because you don’t want people to think you are going to close. You don’t want to panic the community. But at the same time, it’s nice to be heard and understand that this is hard for a lot of people,” said Carrie.

Doug and Carrie said they got PPP loans but didn’t get the restaurant revitalization funds even though they were eligible. They say the extra money could help them stay open.

“It’s just a vicious cycle. To try to keep your employees employed so that they can pay their bills, try to keep the doors open and have enough volume, and be respectful of the fact that people do need to stay home when they’re sick,” said Carrie.

Having enough staff has been a problem too.

“We’ve had to turn people away at the door. And it’s heartbreaking,” said Doug.

“It is heartbreaking,” said Carrie. “Because we need the revenue, we want them here but we also cant burn out our staff.”

On top of that, they say prices on everything have gone up. From beef to seafood, to cups. They say they lost a million dollars in gross sales in 2020 and at least half that in 2021.

“We’ve got a lot of lost ground to make up. But we will,” said Doug.

They are going to stop at nothing to keep their doors open for the people of Tri-Cities and beyond.

“Thank you to all of our customers. Because we adore them and they have been great but just remember this is not over yet,” said Carrie.