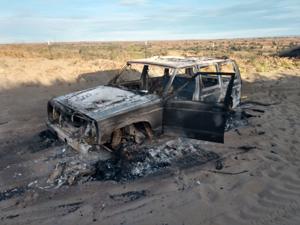 A fire at Juniper Dunes started from an off-roading Jeep that got stuck and then caught on fire, according to Franklin County Fire District 3 Chief Mike Harris. The fire was called in at about 3:45 p.m. on Wednesday.

Juniper Dunes is a popular area for off-road vehicles. There is also a wilderness area where no vehicles are allowed. Its run by the Bureau of Land Management.

The fire spread from the OHV area to the wilderness area. No fire trucks are allowed and it’s difficult to get to, anyway. Fire crews used ATVS’s and side-by-sides to fight the fire. Crews fought the fire with hand tools.

Chief Harris said the crews had some unique help, as well. Two crop dusters out of Pasco flew over the fire and dumped water on the fire. It took roughly three hours to put the 40+ acre fire out.

FCFD3 reports getting help from Walla Walla Co. Fire District 5, Benton County Fire Dist. 1, US Fish & Wildlife and BLM. BLM sent in a crew to take over the fire, cleanup and investigation.

BLM does have a fire prevention order in place. Anyone doing things like off-roading is required to have equipment to put out fires with them like a fire extinguisher or a shovel.