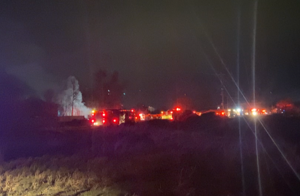 Benton County Fire District #1 got a call around 7 p.m. that there were flames showing from a residence on S Yew in Finley.

BCFD #1 PIO, Captain Ron Fryer, says the home was fully involved when crews arrived. He says the house was a loss.

The two people inside the home did make it out, but Fryer says the man and his daughter inside were taken to the hospital as a precaution for smoke inhalation. Fryer says there were no major injuries.

Benton County Sheriff’s Office and Kennewick Fire Department responded as well. Fryer says they had approximately 39 people fighting the fire at one point and 15 engines on scene.

Fryer says crews were on scene until about 4:19 Monday morning.

Fryer says they are still investigating the cause of the fire. Benton County Sheriff’s office says the reported cause was a wood burning stove that caught fire.