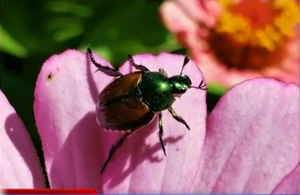 The adult Japanese beetle, an invasive pest of over 300 plants locally has moved outside of where it was first discovered in Grandview according to the Washington State Department of Agriculture (WSDA). The beetle damages plants by skeletonizing a plants foliage according to WSDA.

Thursday, July 28th, WSDA confirmed another beetle caught in Richland to be a Japanese beetle during a routine check.

“Finding two detections so far from the original grid in two separate directions suggests the Japanese beetle population is spreading very quickly,” Camilo Acosta, Japanese beetle eradication project coordinator, said. “The longer the invasive pest continues to thrive here, the more difficult and expensive it will be to control.”

The beetle was found 35 miles east of the proposed quarantine zone in Grandview. Earlier in the same week they confirmed the detection of another Japanese beetle 30 miles west of Grandview.

WSDA said, “Japanese beetle adults are metallic green and brown and have little tufts of white hair on their sides. They emerge – usually from lawns or in other soil – in the spring and feed throughout the summer. From fall to spring the grubs (larvae) overwinter in the soil and slowly develop into mature adults ready to emerge again in the spring.”

WSDA recommends trapping, reporting and killing the beetle if you live in an area where has been found.

WSDA has a real time detection map you can use to see where it has been detected in the last year.

Plans to eradicate the beetle have started with traps going up in and around the infested areas.