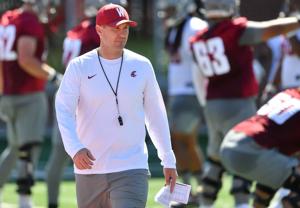 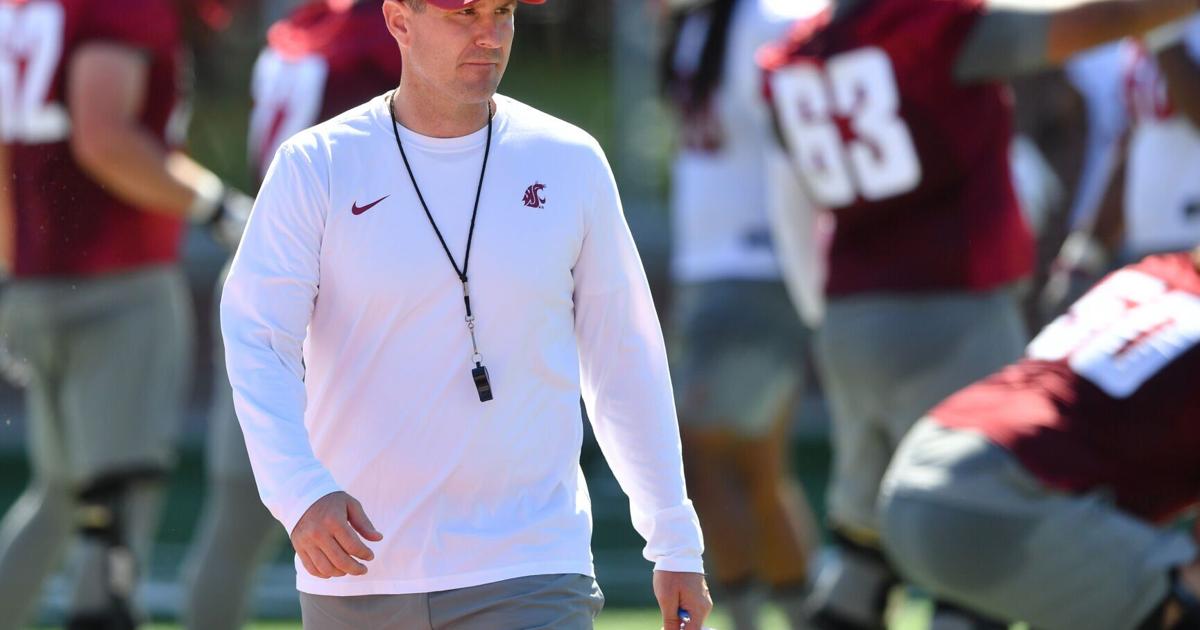 PULLMAN – After completing his first fall-camp practice as a head football coach, Jake Dickert was asked about the significance of that milestone.

He’s already checked off several “firsts” as the leader of Washington State’s program. His first win, for instance, came nearly nine months ago.

But Wednesday no doubt marked a special occasion for Dickert. His staff is complete, his roster is filled out and his standards are firmly in place. Now, the work can truly begin. The Cougs’ preseason opener at Rogers Field was the proper debut of his “New Wazzu.”

“I get goosebumps when I walk out on the field,” Dickert said. “It’s because I’m a football guy and I love fall camp. I love being out here with the guys.

“I’m sure there’ll be many (first-time experiences). You never stop going through that list as you go throughout your career. But to have an opportunity to put a stamp on a fall camp with what our vision is – how we see football at Washington State, and that blue-collar toughness – it’s fun and exciting for me.”

WSU conducted its first fall practice of the Dickert era in sunny conditions and with a host of newcomers in the fold. Cougar assistants – eight of them hired this offseason – oversaw individual drills in between energetic team periods pitting WSU’s exciting new style of Air Raid offense against a familiar brand of turnover-minded defense.

“As I saw today, the energy of the new staff, with what they bring – you stand on the sideline, you feel our coaches,” Dickert said. “I want our guys to understand that. You’re going to feel them because they care about you.”

Dickert split time between the two practice areas at the facility. One side of Rogers Field was designated for younger players and the other for the more experienced Cougs. Dickert wants WSU to be a “player-led” team, and was pleased with what he heard from the Cougars’ veteran standouts while he supervised the newbies.

“Every time I’m down on the ‘young field’, you could just hear the reverberations of what you want,” Dickert said. “We talked about it last night at our team meeting: Because we have a veteran group, it should be loud. Communication should be everywhere.

“I love to hear the noise. I love to hear those guys taking command. I told the group, ‘I’m hearing power language from the old guys.’ … They’re taking ownership and doing things the right way, and that’s the biggest thing I’ll lean into as we go through fall camp.”

WSU’s returning nucleus of mature players had helped ease Dickert’s transition into a head-coaching role. He earned the permanent position in late November after less than two months as acting boss. Those players then bought fully into his philosophies. They have expressed admiration for Dickert’s sincerity and commitment, and the culture of accountability he instituted at WSU.

“This year, I think we just have such spirit,” edge-rusher Brennan Jackson said. “You can see that the guys care about each other. They love each other. We got a really special team here. All of (Dickert’s) values, we believe in – our best every single day, on and off the field, period. Shoot, we all believe it and it’s going to be a great year.”

WSU only practiced in helmets on Wednesday and emphasized the basic details of its schemes, but still put on a decent show for the sizable gathering of media members in attendance. Much of the attention was focused on quarterback Cameron Ward and his deep corps of pass-catchers, and the ongoing installation of the fast-paced “Coug Raid” system.

“I feel like we’re right where we need to be going into Sept. 3,” said Ward, who operated the same offense over the past two seasons at Incarnate Word. “It’s still day-by-day progressions. We’re still adding little things, but (my teammates) have the base offense down. … They know everything. It’s just me giving little pointers.”

WSU continues fall camp with another padless session at 8:30 a.m. Thursday and will practice every day except Sundays until the academic year begins on Aug. 22. The Cougs open their season at home Sept. 3 against Idaho.

It won’t be his first game as the Cougs’ full-time head coach – that was the Sun Bowl on Dec. 31 in El Paso, Texas. But the Battle of the Palouse will mark a significant occasion for Dickert. The opener will serve as the in-game debut of the “New Wazzu,” the first chance for Dickert to present his rebranded program in front of an audience.

Asked a follow-up question about his “goosebumps” remark and his appreciation for the opportunity to put his stamp on WSU, Dickert replied earnestly.