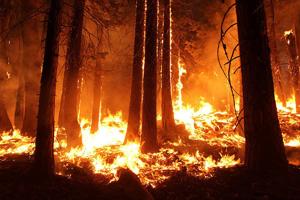 KENNEWICK, WA – Saturday around 2a.m. the Kennewick Fire Department (KFD) responded to a garden shed fire at 4200 block of Clearwater Avenue. Fortunately, no firefighters or residents were injured and no buildings nearby were damaged.

According to KFD, a citizen who smelled smoke and saw flames from half a mile away called the fire in. KFD arrived on scene in three minutes and saw the fire was in the yard of a home on 4185 Grand Ronde Avenue. Their garden shed and a line of 40 foot arborvitae trees were involved in flames 60 feet high.

Firefighters controlled the fire within 15 minutes. The cause of the fire is still under investigation.

This fire is the second firefighters have responded to in the last couple of months involving arborvitaes. KFD responded to a similar fire on April 10.

Arborvitae are commonly used to create privacy screens or windbreaks. KFD tells us they are very flammable and lead to rapid fire growth after being ignited. They would like to remind people that as summer quickly approaches, to keep all landscaping maintained in a way that helps reduce the potential of fire spread.