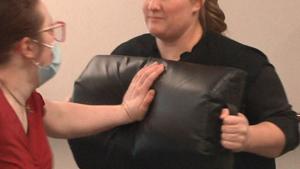 Anyone can experience a dangerous situation, at any point. At the grocery store, walking your dog, even in a parking lot.

Greg DeRoos is the Owner and instructor at Krav Maga Tri-Cities. He says its a method of self-defense that was used in Israel in the 1940s.

“Krav Maga is an easy to learn self-defense against real-world situations,” said DeRoos.

It’s about instinctive movements, using your voice, and knowing how to defend yourself if it ever got that far.

Beatriz Espinoza is a student at KMTC.

“I’ve got friends that will go, ‘Oh, why would you assume somebody is going to attack you?’ And I’m more like, it’s not to assume, it’s just in case in the event of that, that I could protect myself. Because really, who else is going to protect me?” said Espinoza.

Krav Maga isn’t just for women, it’s for everybody, regardless of gender or age.

DeRoos says one of the most important pieces is learning how situational awareness can help us stay alert.

“I call it living in yellow. It’s a color scheme that’s widely known out there. It’s just to understand your surroundings. Look around, put the phone away and just see what’s going on around you. That will help you stay out of trouble more often than not,” said DeRoos.

He says it’s important to learn the basics, like nonverbal and verbal ways to protect yourself, explosive movements, and counterstrikes.

“It’s kind of like a mixture of all the self-defense in one that’s more realistic,” said Espinoza.

DeRoos says the world is a cool place, but bad things can still happen.

“It’s really basic stuff that sometimes people just need to hear. They might know it, but need somebody to tell them,” said DeRoos.