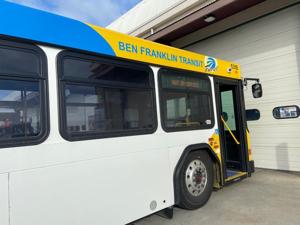 Three billion dollars of the money will go to public transit.

They recorded 1,788,932 boardings across their various services last year. In 2022, boardings were initially estimated to be just over 1,600,000, but BFT says its numbers could be higher because of rising gas prices.

Marie Cummins is the marketing and communications director for Ben Franklin Transit.

“I think every transit agency has felt possibly underfunded in past years. So there’s a definite consensus of excitement for us to get some of these large capital projects that have been on our to-do list for a while,” said Cummins.

They would receive 50-75 million dollars over the course of 16 years if they were eligible.

To qualify for maximum funds, they would have to implement a fare-free program for riders under the age of 18, which would be adopted by their board of directors and submitted to the state department by October 1st of this year.

Cummins says students make up about 30 percent of their customers.

“In addition to implementing the far-free program for our youth riders, we also have to maintain our current level of state tax funding. Currently, BFT is funded at .6 of a cent for state sales tax,” said Cummins.

If they do get the funding, they will focus on two main things. The first would be increasing ADA accessibility for their bus stops. Secondly, they want to build three additional transit centers. One in the Southridge area of Kennewick, one in Benton City, and another in Prosser.

Local funding is about 80 percent of BFT’s operating budget and then the other 20 percent comes from the state, grants, and federal money.

“When we can get a chunk of money like this it hugely impacts our ability to provide good service to our rider,” said Cummins.

The governor is expected to sign off on the package this Friday, March 25th.