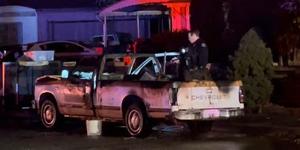 Pasco Police Department (PPD) responded to a call on the 200 block of South 26th Avenue around 10 p.m. Thursday night involving a truck on fire with fireworks in the backseat.

Sergeant Ward of PPD tells NBC Right Now that when police arrived on scene the car was engulfed in flames and they worked quickly with Pasco Fire Department to put the fire out.

No one was injured but there was damage to the truck and the property it was on. This is a developing story and we will update you when we know more.