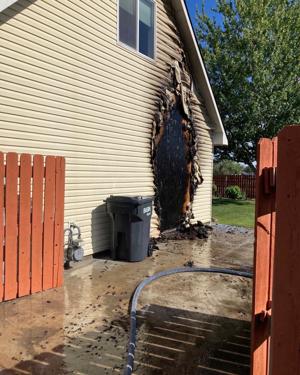 “Without the quick thinking of these hometown heroes the damage would have been worse,” said Pasco Police on Facebook. “Good people doing good things, looking out for each other. We can’t do it alone, THANK YOU!”

When officers arrived they found the fire had already been extinguished by some quick thinking workers from the construction site behind the property.

Pasco police said one worker hopped over the fence with a fire extinguisher while another one got their water truck and sprayed the burning area with water. Fire units arrive shortly after to add more water and check the structure for hotspots.

It appears the fire was mostly contained to the siding. Pasco Police said the cause was unknown, but it may have been related to the spontaneous combustion of organic material in a plant pot next to the house.