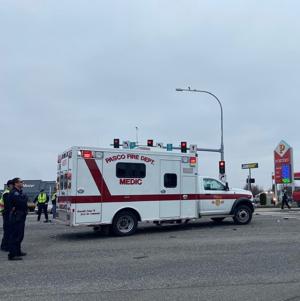 Pasco Police say they were conducting a traffic stop just before noon on Saturday for a potential stolen vehicle.

They say they tried to stop the car south of Burden Blvd. Police say the car went around northbound traffic and blew through that intersection at Burden Boulevard and Rd. 68.

Police say the driver, a 23-year-old woman, crashed her car, which led to a second crash at that intersection.

The 23-year-old had two other men in the car with her and police say all three of them were transported to local hospitals. Police say the woman is in custody but her passengers are not at this time.

Police say they do not have updates on the conditions at this time.