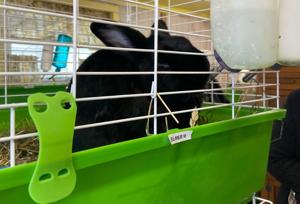 Darcy Sherman runs Tri-Cities Washington Rabbit Advocates, a nonprofit (501c3) with a focus on rescuing dumped, abandoned, or abused domestic rabbits. She rescues domestic rabbits in the Tri-Cities, all the way to Sunnyside, Prosser, and Yakima. So far, Sherman says she’s saved around 350 rabbits, about 40 per year.

She’s been at it for about seven years. Five years ago, she got the little building that the rabbits stay in now. At any given time, she has 30-40 rabbits there.

“Just trying to keep them happy and healthy, it keeps me really busy,” said Sherman.

The city of Kennewick received a complaint on March second, saying Darcy was ‘hoarding’ rabbits in a ‘dilapidated’ building that was falling over. She says this isn’t true, and that there’s never been a complaint before in the seven years she’s been open.

The city checked it out after the complaint. Evelyn Lusignan, a spokesperson for the city of Kennewick says they like to be flexible and work with people.

“We’re always here to find solutions, if there are any, finding ways to meet our code requirements,” said Lusignan.

The city of Kennewick has a code that places a limit on the number of animals allowed on residential properties:

18.12.040: – Animal Keeping. In R, HMU, and UMU districts, dogs and cats of the age of ten weeks or older, rabbits, guinea pigs, fowl, pigeons, chickens (excluding roosters) and similar small animals may be kept so long as no more than three of each kind or a combined total of six are kept. All cages, pens, and runs must be maintained in a clean and sanitary condition and meet setbacks. Animals and birds must not roam or fly to adjacent properties. Animals and birds and their surroundings must be maintained to prevent a nuisance due to noise or smell. An increase in the allowable number will be permitted upon issuance of a Land Use Permit in accord with Section 18.42. ( Ord. 5712 Sec. 6, 2017 ; Ord. 5542 Sec. 4, 2014; Ord. 5180 Sec. 1, 2007).

This means that she’d have to re-home all but three bunnies by April 16th.

They are now working together to find a solution by way of a land-use permit application. If it works out, this could allow for additional animals to stay.

“Our planning department will review that application, look at the items like, ‘Are there safe conditions there? Space? Are there any issues with the neighbors?’ The neighbors have a chance to comment on the application,” said Lusignan.

There is a silver lining though, as Sherman calls it. In the days since the complaint was called in, she’s gotten donations, had letters written to the city on her behalf, and has re-homed several rabbits.

“I have probably adopted out about 25 rabbits since the complaint happened,” said Sherman. “The community has been great, and I’m hoping there is a silver lining to what started as an upsetting, tragic event.”

Sherman says rabbits are dumped often, which can cause overpopulation issues, or even kill them. Little Lives Small Animal Rescue works closely with them, especially after Easter.