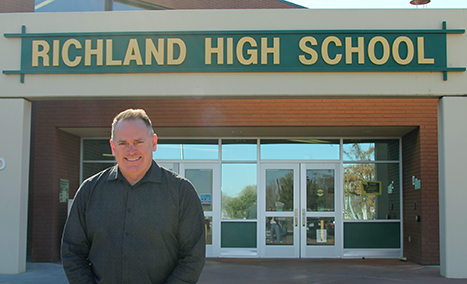 Tim Praino, who has led Richland High School for more than a decade, will be Richland School District’s next Executive Director of Human Resources.

He replaces Assistant Superintendent Tony Howard, who will be starting a new role with Washington State University in the spring of 2022. Deputy Superintendent Mike Hansen will oversee the district’s human resources department until Mr. Praino starts in his new role on July 1.

“Tim has demonstrated throughout his time in our schools an ability to bring people together to accomplish great things for students,” Mr. Hansen said. “We are confident that his approach will go far in strengthening our schools and supporting staff.”

Mr. Praino began his teaching career as an elementary teacher in the Pasco School District in 1993. He then moved into teaching middle school and briefly served as a middle school administrative intern in Pasco before becoming an assistant principal at Carmichael Middle School in 2003. He became the Carmichael principal in 2005 before becoming Richland High’s chief administrator in 2011.

As an administrator he’s implemented student support programs such as Character Strong, was among those who started a mentoring program for new teachers and, more recently, has been a leader in growing co-teaching at Richland High to improve inclusive learning practices.

“I am going to deeply miss working with students and the staff I have worked with for so many years,” Mr. Praino said. “But I am excited to take on this new challenge that will let me do even more to ensure our students have the best staff and that those staff have the support and resources they need.”

The district will begin the process to fill the principal position at Richland High in the coming weeks.