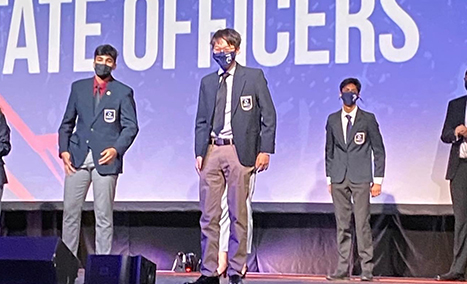 DECA students from Hanford and Richland high schools took Bellevue by storm when they attended the State Career Development Conference.

In the Entrepreneurship Events, freshmen Nathan Keseljevic and Navaj Nune from Hanford High placed seventh and junior Anika Halappanavar from Richland High placed third for their Innovation Plans. Anika’s Innovation Plan was a digital robot (“FakeBot”) that flags and detects fake news/misinformation on social media. It does this by changing colors from red to yellow to green on the varying levels of truthfulness a social media post has. For example, if a post is classified as fake the robot turns red. If a post is true, it turns green and it turns yellow for unsure/ misleading information. Nathan and Navaj’s project was focused on Lasik glasses. Their rankings qualified them to move on to the International Career Development Conference, held in Atlanta in late April.

At the State Career Development Conference, new state DECA officers were also elected. Richland’s Christopher Kim was chosen to lead Area 6, which houses teams from the Richland School District. Anika Halappanavar was chosen as Washington State’s 2022-23 DECA President, having previously served as the president of Area 6.  Officers are elected by their peers and develop a Program of Leadership for the upcoming year that aligns with the strategic goals of Washington DECA.

More than 3,000 students attended the State Career Development Conference. The top 7 from each competition category move on to the International Conference.