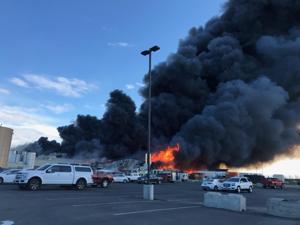 The CEO of Shearer’s Foods announced that the company is ending employment for all workers at the Hermiston plant after a massive explosion and plant fire in late February.

In a statement, CEO Bill Nicktakis says “After assessing the damage, it’s clear that the destruction is too great to quickly rebuild and begin production in the near term. Unfortunately, it would take at least 15-18 months before we could resume production. We have not yet decided the future of the Shearer’s Hermiston site. This has led to the very difficult decision to end employment for our team members.”

It’s unclear how many team members were at the Hermiston plant and will be let go.

Nicktakis also said the company is exploring options to relocate some of the employees. He says the company is also providing a severance and benefits continuation package.

Six people were injured in the explosion. All were taken to a local hospital and later released.

The Umatilla County Sheriff’s Office confirmed the cause of the fire appeared to be a portable natural gas-powered boiler that exploded.

The explosion closed roads surrounding the plant, as well as the rail line nearby, for several hours.

The Hermiston Chamber of Commerce had already planned to host a job fair for the employees in case the plant remained closed. That job fair is scheduled for March 16 from 9 a.m. to 6 p.m. at the Hermiston Community Center.

Nicktakis said Shearer’s Foods will work with other organizations to plan events like food drives and family activities for employees. He said counseling services will also be available.

You can see the full Shearer’s Food statement below: