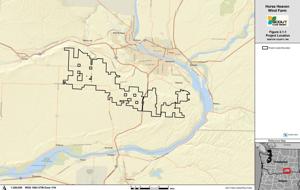 A 24-mile proposed wind farm project outside of Kennewick city limits is one step closer to approval after it was ruled a consistent use of the land by a state council on May 17. The Washington State Energy Site Evaluation Council (ESFEC) shared that order in May. Now, Tri-Cities union trades are in an agreement with Scout Clean Energy to build it.

The farm has been a source of controversy with many local leaders, activists and farmers saying they oppose the project. More than 200 turbines would be built along a the Horse Heaven Hills. Governor Jay Inslee is in support of the project. Scout Clean Energy says the project will help Washington meet its clean energy transition services.

According to Scout Clean Energy (SCE) the wind farm project will bring in over $260 million dollars in tax revenue to Benton and Franklin Counties, with much of that going directly to local schools, roads, hospitals and emergency services.

“We are proud that the Horse Heaven Clean Energy Center will be built by the hardworking and highly skilled local workforce of the Tri-Cities and Central Washington,” said Senior Project Manager Dave Kobus. “We are fortunate to have such great labor partners and look forward to putting a lot of people to work.”

SCE has said it hopes to build the first phase of the project by the end of 2023.