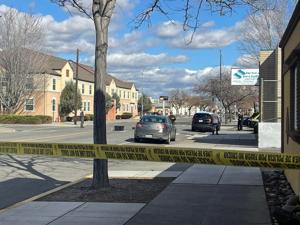 PASCO, WA – Pasco Police Officers were dispatched on Sunday at about 11:40 am to an altercation between two men in the street on W Lewis and 6th Ave. It was reported one of the men was armed with a knife.

When officers arrived one male was lying on the ground with what seemed like stab wounds.

One officers rendered aid to the injured male. Unfortunately, he died of his injuries at the scene.

Two additional officers approached the armed man. The man charged at the officers several times. Officers attempted to de-escalate the situation and failed. This lead officers to use force, shooting the suspect, striking and stopping him.

Officers immediately rendered aid to the suspect who was then transported to a nearby hospital to be treated. His condition is unknown at this time.