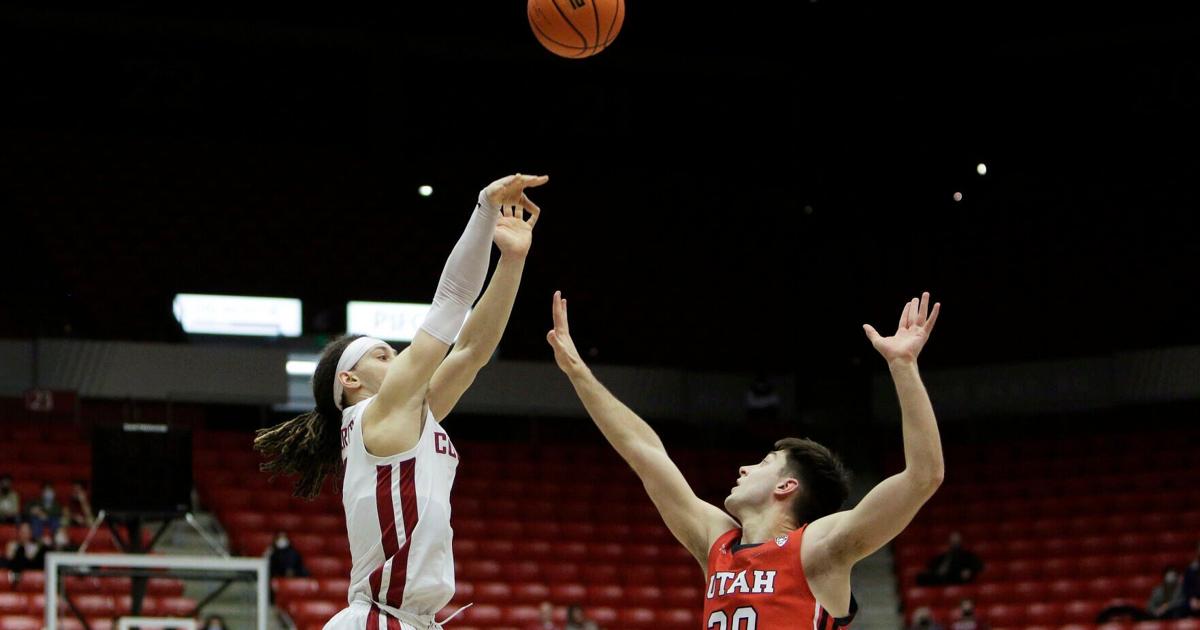 PULLMAN – During the preseason, coach Kyle Smith had described new Washington State guard Tyrell Roberts as a “walking bucket,” a sharpshooter capable of stacking up points in a hurry and single-handedly shifting a game’s momentum.

The junior transfer poured in 11 of his 15 points in the first seven minutes of the second half, sparking the Cougars to a 71-54 runaway win over Utah at Beasley Coliseum.

“He always guards and does a good job (defensively), and I told him, ‘When you bang shots, it’s hard to beat us,’ ” Smith said of Roberts, a former Division II All-American at UC San Diego who’s averaging 11 points per game this year. “That flurry gave us the cushion we needed.”

Roberts shot 0 of 6 before intermission, but he found his groove right out of the locker room, swishing a 3 from the wing. He knocked down two more from NBA range, then took a defender’s ankles when he spun and weaved inside for a short jumper, which elated the Cougar bench and capped a spurt that effectively buried the Utes.

“I just needed to see one go in,” Roberts said. “I just kept getting the looks, and they were falling.”

The Utes’ eight-point halftime deficit quickly became 24. They trimmed it to 13 with two minutes remaining, but the Cougars closed it from the foul line. Utah (8-13, 1-10), clearly dazed by WSU’s sudden offensive surge, forced shots and threw away possessions.

The Cougs (11-7, 4-3) bounced back from a sloppy first half on offense and improved their efficiency in the second. They controlled the glass, logging 18 offensive rebounds, and their defense overwhelmed the visitors to the tune of a season-best 19 takeaways.

“Really tickled with the outcome of this game and how we played, especially considering we’d been out for a while,” Smith said. “I had no idea how we’d come out, but our defensive pressure, our intensity was good. … We were in uncharted territory with how much time we’ve been off.”

The Cougs hadn’t played a game in 11 days due to COVID-19 protocols in their program. They had only conducted two team practice sessions since their season was put on pause Jan. 18.

“It’s definitely hard,” Jakimovski said. “We didn’t practice as a team for almost a week. … But, you know, we tried to stay in shape and I think the week off is good for us to prepare mentally for the rest of the season.”

Besides a few “sluggish” moments early on, Smith was pleased with the Cougars’ effort and energy fresh off a long break.

WSU began to separate late in the first half despite its shaky shooting throughout the period. The Cougs connected on just six of their first 20 field-goal attempts, but capitalized on extra possessions, forcing 13 turnovers and snaring eight offensive boards in opening up an 11-point lead about a minute before the break.

They shot 33% from the floor in the opening half against Utah’s 47% mark. Percentages can be deceiving, though. WSU attempted 17 more field goals in the first than the Utes, who managed just eight field goals. Overall, the Cougars went 24 of 65 and Utah finished 18 of 46 in dropping its ninth straight game. The Utes were paced by one double-figure scorer in guard Lazar Stefanovic.

Williams and Jakimovski combined to drain their first five field-goal attempts and scored the Cougs’ first 12 points. No other WSU players got on the board until 11 minutes had passed.

The Cougar offense seemed to find its footing in the last couple of minutes. Gueye hammered home a dunk off a pick and roll from Michael Flowers, who soon after drilled a 3. Flowers and Roberts shot a combined 1 of 12 in the first half.